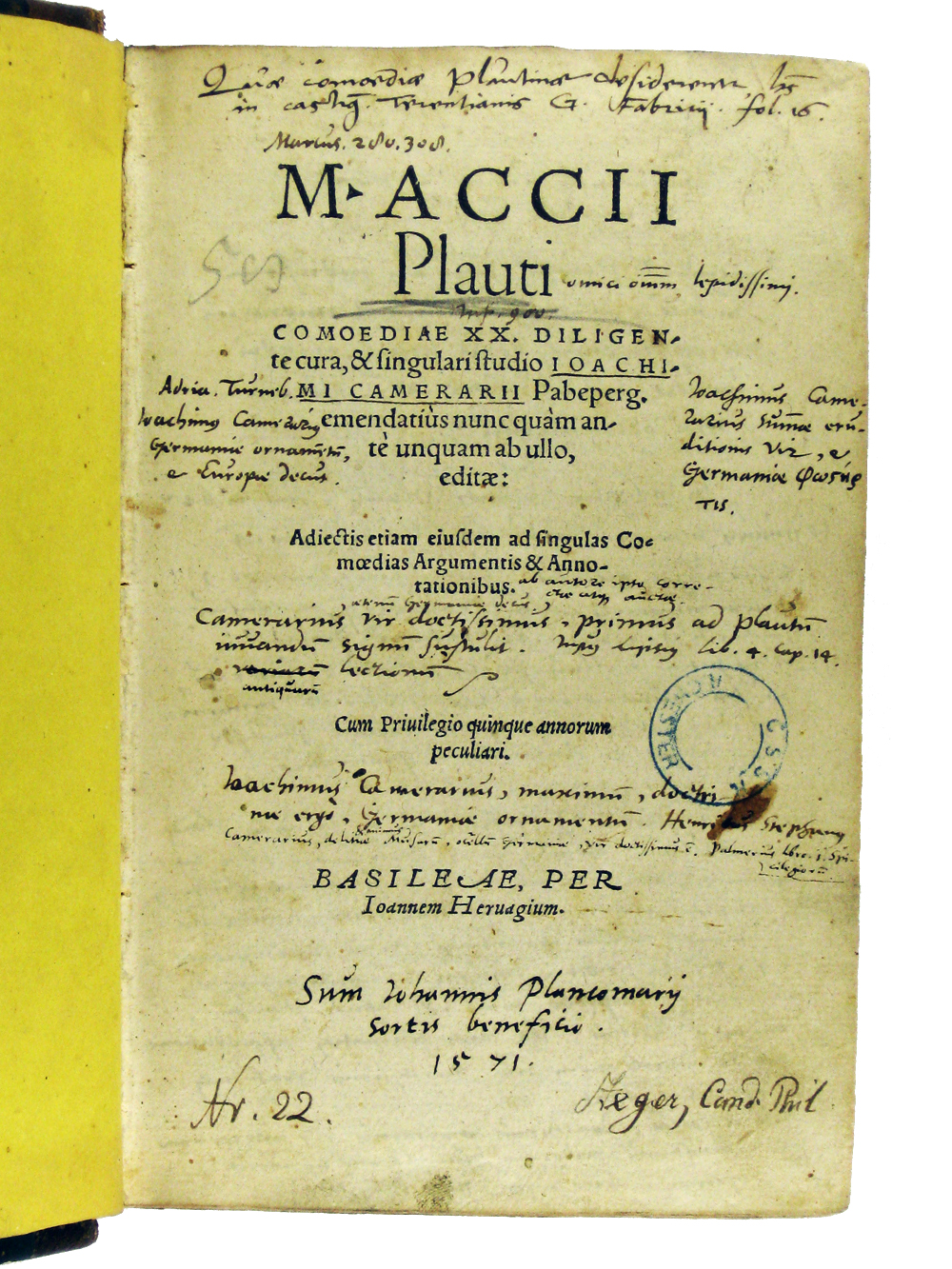 The present octavo of Plautus’s Comedies contains the version edited by Joachim Camerarius (1500–1574). Camerarius was one of the most important classicists of his era, translating many of the Greeks into Latin and providing the commentary on Plautus that appears in this volume. He also wrote widely on other topics, including numismatics and horsemanship. He knew Erasmus, and, while studying in Wittenberg, came into contact with Philip Melanchthon, who became a friend. Camerarius was present with Melanchthon at the diet of Augsburg in 1530; correspondence between the two men survives.

Camerarius’s work on Plautus proved influential, and appeared in at least ten editions between 1530 and the end of the century. Copies are not uncommon. What sets the present book apart from others is not so much the text, but the extensive commentary in the form of earnest and engaged annotations that surrounds it. Not a single page goes unmarked, and, on many pages, annotations fill most of the marginal and interlinear space available. Some marks even connect passages together across an entire opening.

Helpfully, one annotator signed the title page of the book when he had it in 1571: “Sum Iohannis Plancomarij / sortis beneficio. / 1571.” At this time, Johannes Plancomarius—Johan Planckemair of Aichach*—taught at the St. Anne Gymnasium in Augsburg. Founded in 1531 at the order of the Evangelical Council of that city, the school was designed as a Protestant alternative to the Catholic institutions in the region. The famous humanist Hieronymus Wolf, who was himself a student of Melanchthon and Camerarius, was one of its first rectors. Indeed, he may have been responsible for Plancomarius’s appointment in 1566. In a letter to the physician Johan Schenck in 1578, he refers to Plancomarius as a close associate (“affinis”) and a colleague (“collega”). And there is much more to be gleaned about Plancomarius’s time at St. Anne from other German sources. What is already clear is that, due to the association with Plancomarius and an important school, this book will contribute to our understanding of the Wolf-Camerarius circle and the educational system under Protestantism. It is entirely possible—perhaps even likely—that Plancomarius had met Camerarius himself. Annotations in his hand on the title page and its verso discuss Camerarius directly,  evincing a specific interest in the volume’s editor.

Before teaching at St. Anne, Plancomarius was a student at the university in Ingolstadt. He entered the Faculty of Arts there on 11 June 1557. The scholar Peter Macardle has located a volume that Plancomarius inscribed that same year, probably soon after beginning his studies. It is a copy of publisher Johannes Oporinus’s collection of biblical plays, Dramata Sacra (1547), and is now at the British Library under the shelfmark 11712.b.1. Ten years before the book ended up with Plancomarius, it had been given to another individual—a student—by the dramatist Hieronymus Ziegler, who inscribed it. When he first donated the volume, Ziegler was actually a teacher at St. Anne, but had moved to Ingolstadt by 1557. Presumably, Ziegler served as one of Plancomarius’s instructors. In Dramata Sacra, a hand that is probably Plancomarius’s has annotated only one play: Ziegler’s Samson.* These are the two Plancomarius inscriptions, as reproduced by Macardle: In addition, a letter from Plancomarius to Johannes Ehinger survives in a bound volume at the Wurttemberg State Library in Stuttgart. It is dated 23 June 1593, and is documented in Die Autographensammlung des Stuttgarter Konistorialdirektors Friedrich Wilhelm Frommann. It is preserved as part of a larger set of letters written to Ehinger. Plancomarius also inscribed the autograph album of Georg Salzhuber in an entry dated 3 March 1576. Finally, I have located a third book that Plancomarius owned. It is now at the Regensburg State Library, and can be found in their provenance database. The title page specifying that Plancomarius owned the book has been digitized along with the rest of the volume—a sammelband—that contains it.

Plancomarius’s inscription in the Plautus, stating that he acquired the volume “sortis beneficio,” is obscure. It may represent a poetic way of indicating only that he came into possession of the book in a way one normally does, that fate was behind such a pleasant acquisition. But, because the language is so atypical, it may mean that he actually received the book by lot, through a kind of lottery or selection process. In 1571, Plancomarius was already an instructor at St. Anne, and it is difficult to know what circumstances could have made this kind of thing possible. I have not located another ownership inscription using this phrase.

Because the annotations in the Plautus are so extensive, it is difficult to ascertain the precise number of hands present in the volume. Some that appear to represent distinct readers because of variations in size and the thickness of the strokes are almost certainly Plancomarius writing at different times, though there are others that may point to other individuals. At least one of the annotations, which quotes a letter from Camerarius to Wolf, must be from 1583 or later, when Wolf’s correspondence appeared in the printed edition it cites. Taken individually and as a complete set, the annotations demonstrate serious engagement with the state of the text, the commentary tradition, and the nature of the comedies themselves.

The Plautus collates complete, and is in a nineteenth-century quarter binding with marbled paper over pasteboard. The pastedowns and endpaper bifolia are of yellow paper. The bookblock is sewn on three supports; they are detached at the upper hinge. They do, however, remain secured at the lower hinge, and the joint between each board and the spine covering is intact with only minor rubbing. The binding was made with a hollow back, and bookblock remains protected when the covers are closed.  On the spine, a compartment defined by gilt ornamental rolls (and blind rules) contains “Plauti,” which is also gilt. “Z” appears near the foot, and there appears to be a blindstamped “1” or “I” to the right of it. Although not ideal, the detachment at the front has the unexpected virtue of revealing a spine liner recycled from a nineteenth-century German-language newspaper. Among other things, the preserved section contains part of an advertisement for the Germania Life Insurance Company at 90 Broadway, in New York City, and there is a mention of the Sing Sing Correctional Facility dated 14 October 1865. This may indicate that the binder was a German immigrant working in or near New York not long after the Civil War. According to a report issued in 1868, the Germania Life Insurance Company was founded in 1860 and was, in 1868, located at the 90 Broadway address. An insurance periodical confirms that the insurance company occupied that office in 1861. Another report, from 1886, locates the company at a new address, 20 Nassau Street, which helps to establish a terminus ante quem for the newspaper clipping, and, in all likelihood, the binding itself.

The final two leaves show some chipping at the edge, which does not affect the printed text, but cuts a few words of the manuscript annotations that appear at the foot. In addition, there is a worm track that has damaged the foot of the final three pages, obliterating some letters from the same set of annotations. The leaves of the volume are otherwise crisp and intact. Despite the fact that the book has been rebound, the remainder of the text and annotations remain wholly uncropped. Somewhat miraculously, the block does not appear to have been trimmed since the 16th century.

A printed label on the front pastedown reads: “Ex bibliotheca Congregationis SS Redemtoris. Rochester, N. Y.” It includes unused spaces for shelving information. In addition, there is library card pocket at rear, labeled “Mt. St. Alphonsus Library” with a list of the library’s rules. A stamp for the Rochester congregation, “C. S. S. R.,” appears on the title page, and a Mt. St. Alphonsus library stamp appears on the title page verso and on a page deep within the text. Mt. St. Alphonsus was a seminary in Esopus, New York, that later became a retreat center and finally closed in 2012. The spine liner, mentioned above, locates the binding to America in the nineteenth century, probably in New York City or nearby. The volume was sold in 2013 at the auction of the Mt. St. Aphonsus Library, and appears to have come to that institution from the Rochester congregation. Most recently, it was sold by an online bookseller in New Jersey.

Both the annotations and printed content in this volume exemplify the kind of humanism that scholars routinely associate with the Renaissance. It presents the rare occasion in which we have a heavily (and interestingly) annotated book that can be connected not only with a known individual, but with a significant institution, and a network of influential humanists. This important book will no doubt reveal much to historians of humanism and education, researchers in the history of reading, those interested in the reception of drama, and literary scholars more generally. SOLD

* For information on Plancomarius’s life before arriving at St. Anne and the volume at the British Library that he annotated, see Peter Macardle, “Hieronymus Ziegler’s Handwriting: Autographs in Two Books in the British Library,” Wolfenbütteler Renaissance-Mitteilungen 18.2 (1994): 51–55.