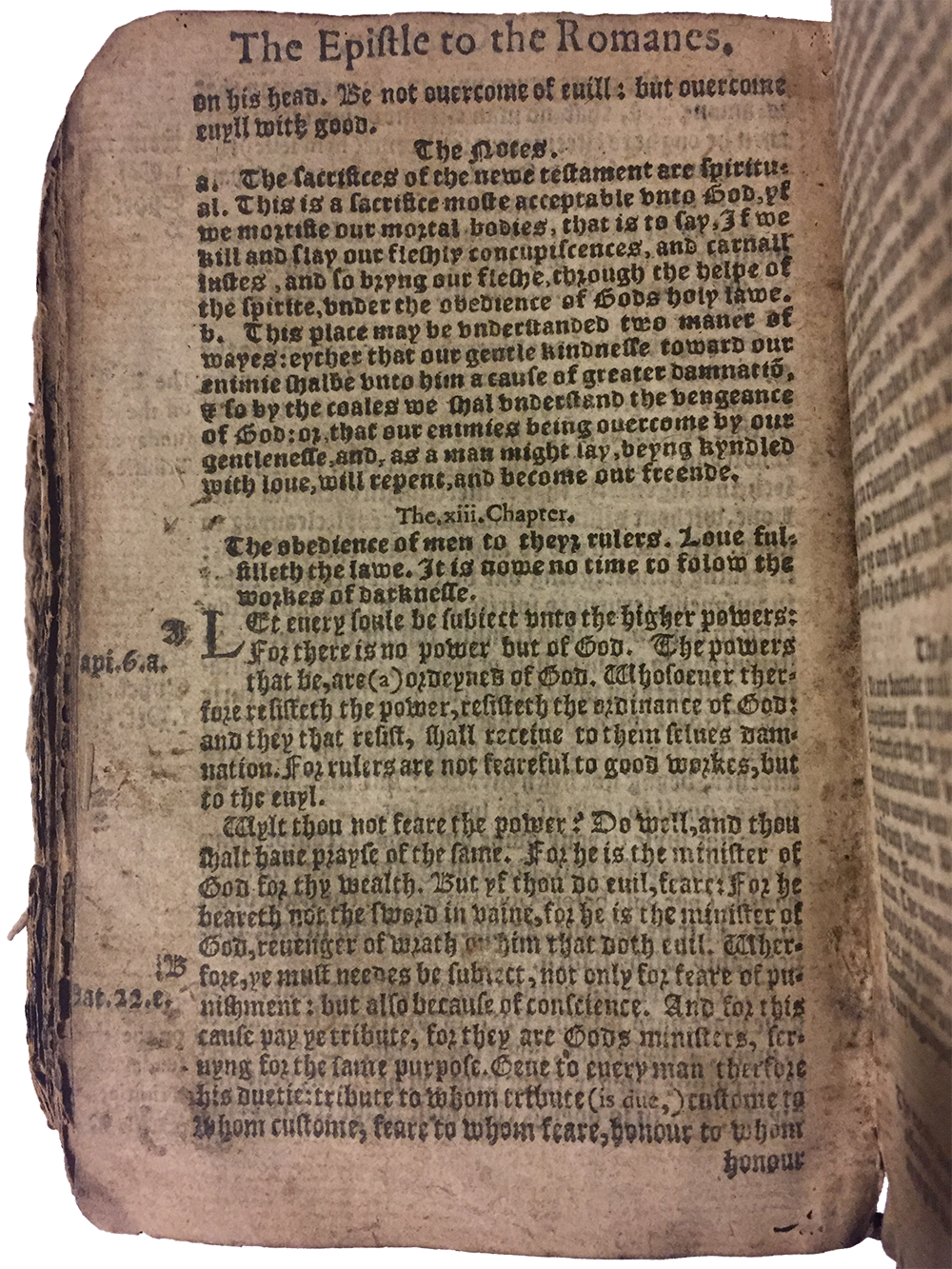 2011 marked the quadricentennial of the King James Bible’s first edition, and it saw the publication of entirely too many books and essays on English Bibles. For one of these, Hannibal Hamlin and Norman W. Jones’s The King James Bible After 400 Years: Literary, Linguistic, and Cultural Influences (Cambridge: CUP, 2011), I contributed to the madness in the form of a chapter I coauthored with John N. King: “The Materiality of English Printed Bibles from the Tyndale New Testament to the King James Bible.” The title is more than a mouthful, and the chapter itself may not make for the most exhilarating read—there’s a lot of detail—but writing it proved very important to my own development as a scholar. In fact, the research that went into it was, perhaps more than anything else, what got me into both “hardcore” technical bibliography and the history of the English book trade. Because of this, I have long been thankful that John trusted me, a lowly MA student at the time, to take on the project with him. The skills I began to develop while writing the chapter have paid dividends.

I remain proud the 2011 chapter itself, too, but it’s not perfect. (What piece of scholarship is?) Most significantly, I soon came to realize that the differences between early editions of the Bible and New Testament were so many that the prevailing paradigm of thinking about the history of the English Bible in terms of translation is woefully insufficient—especially if we want to understand how early modern readers actually interacted with Scripture. One response to this realization will be the new bibliographical resource that I have slowly been working on since. Titled BEME: Bibles of Early Modern England, it will provide authoritative records for Bibles and New Testaments published in the English language, records that include but move beyond basic bibliographical information and account for (virtually) every piece of paratext present. I am excited about the new research this resource will facilitate once it is online in the form of a free website.

After I had tabled work on English Bibles for several years to write a dissertation on drama, Thomas Fulton and Kristen Poole presented me with a timely opportunity to revisit my earlier research and gear up for serious work on BEME: they invited me to write a chapter for The Bible on the Shakespearean Stage: Cultures of Interpretation in Reformation England, which is now out from Cambridge University Press. My contribution, “The Trouble with Translation: Paratexts and England’s Bestselling New Testament,” focuses on a line of octavo New Testaments that was in print from around 1553 until at least 1619. Known to its contemporaries as the “Cheke” New Testament, it was likely the single bestselling book of Scripture in English under three monarchs: Edward VI, Elizabeth I, and James I. And, yet, it is all but unknown today. Its title and title-page marketing, along with its paratexts, stay remarkably consistent, making it possible to identify as a distinct series, but the book has largely flown under the radar for two main reasons: 1) few have paid attention to specific Bible and New Testament product lines as such, and 2) it has been hard to see the Cheke Testament as a product line because the translation included in editions shifts from one to another around 1568, from the Tyndale to the Bishops’.

Naturally, I’d love for everyone to read the chapter. I think its local intervention in highlighting these specific New Testaments and its broader argument about the importance to early modern Christians of paratexts and the product lines they generated are both important. The centrality of translation in existing histories of the English Bible and in broader accounts of confessional identity in the period has created both blind spots and distortions. I’ll be totally honest, though: there are a few particulars that are either wrong or that I would now consider at least potentially misleading. A couple were proofing mishaps, and others, well, are just on me. So, in the spirit of an early modern printer (or just a slightly embarrassed scholar), here are some errata (with explanations) to accompany “The Trouble with Translation: Paratexts and England’s Bestselling New Testament”:

* The featured image is from my personal (very ragged) copy of a Cheke New Testament published by Richard Jugge, probably at some point between 1573 and 1575 (STC 2875).