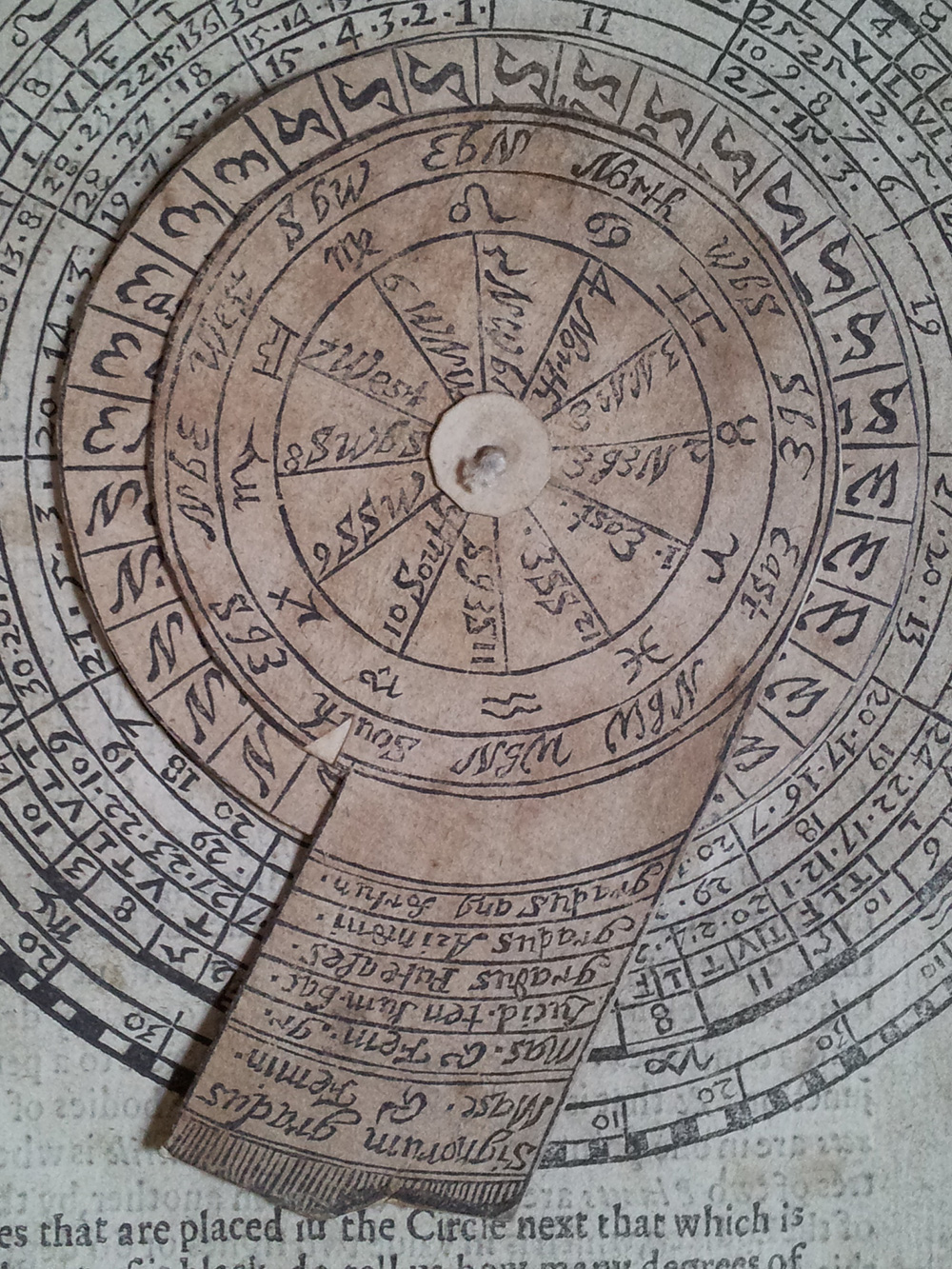 Dariot, Claude. Dariotus redivivus: or a briefe introduction conducing to the iudgement of the stars. Wherein the whole art of iudiciall astrologie is briefly and plainly delivered: by which a determinate judgement may be given upon any question demanded. Written at first by Claudius Dariott, at present much inlarged, and adorned with diverse types and figures, by N.S. Also hereunto is added a briefe treatise of mathematical phisick. Written by G.C. Together with divers observations both of agriculture and navigation, very usefull both for merchants and husbandmen. By N.S. London: Andrew Kembe, 1653. Quarto. Wing D257.

French astrologer Claude Dariot’s Ad astrorum judicia facilis introductio was first published in 1557, was issued in French the following year, and made its way into the English language in editions published by Thomas Purfoot around 1583 and again in 1598. The next English edition came in 1653 in the form of the present work, Dariotus Redivivus, which, according to the title page, enlarged the original and adorned it with “diverse types and figures.” It was also supplemented with additional works: a treatise on “mathematicall physick,” or medicine; tables for tracking the motion of the planets and moon; and a tract for judging the weather, or “Change of the Aire.” It would appear that the edition, published by Andrew Kembe, was designed a compendium of the period’s practical astrology.

The present copy is complete, including the frontispiece woodcut of the Armillary Sphere and, very remarkably, all five volvelles, which are intact and functional (on sigs. F3r. G1r, L1r, V1v, and Z3r). A later owner has mounted the moving parts of the volvelles onto a thicker stock, preserving and rendering them far less fragile. The other diagrams and woodcut illustrations are also present as called for. There are separate dated title pages for the later parts—”A treatise of mathematicall physick.”, “A proportionall table”, and “A tract concerning the weather”—on sigs. S4r, 2B1r, and 2K1r, respectively. Of interest to bibliographers and historians of the book trade is a catalog of Kembe’s books included at the rear of the volume.

The book is currently in a mid-nineteenth century English divinity calf binding and has marbled endpapers and pastedowns. The board edges and spine are somewhat rubbed, but the binding remains secure with the boards attached. Affixed to the front pastedown is the gilt bookplate of Edward Hailstone (1818-1890), a Yorkshire antiquarian. On one of the front endpapers is the New York label of John M. Pryse (1863-1952), writer, publisher, and purveyor of occult books. On another of the endpapers is a manuscript note on astrology written by a “Thomas Sheridan” in Dublin. The ten commandments have been written out in a fairly early hand on the blank recto of the book’s first leaf, which contains the frontispiece on the verso. Throughout the work are numerous doodles, notes, and at least one or two additional ownership inscriptions.

Though complete, the book is not without some imperfections. The frontispiece leaf is missing a section from the lower fore-edge corner, but, fortunately, it doesn’t encroach on the illustration. The title is missing a section at the top edge, which has resulted in the loss of the word “Dariotus” and part of the letter “R” in the title. In the middle of the leaf is a 2-3cm hole that, curiously, also impacts the author’s name. (Did an owner feel the need to obliterate the references to Dariot for some reason?) The leaf has been somewhat crudely patched on the blank verso and the missing words have been reinscribed in MS: “DARIOT” and, below it, “WITH.” Two leaves, 2B1 and NN3, have had roughly 1.5cm extra trimmed off of the fore edge, not, however affecting any print. The outer edges of some diagrams and volvelles were slightly cropped when the book was trimmed and rebound.

In all, this is a nice copy of a work that very rarely survives in a complete state due, in large part, to the fragility of its volvelles. It should be of interest to collectors of astrological works as well as those who study technologies of the book. With its notable provenance and manuscript annotations, this copy also shows the many lives that books so often live. It bears evidence of travels from London, where it was published, to Dublin, and across the Atlantic to New York. SOLD