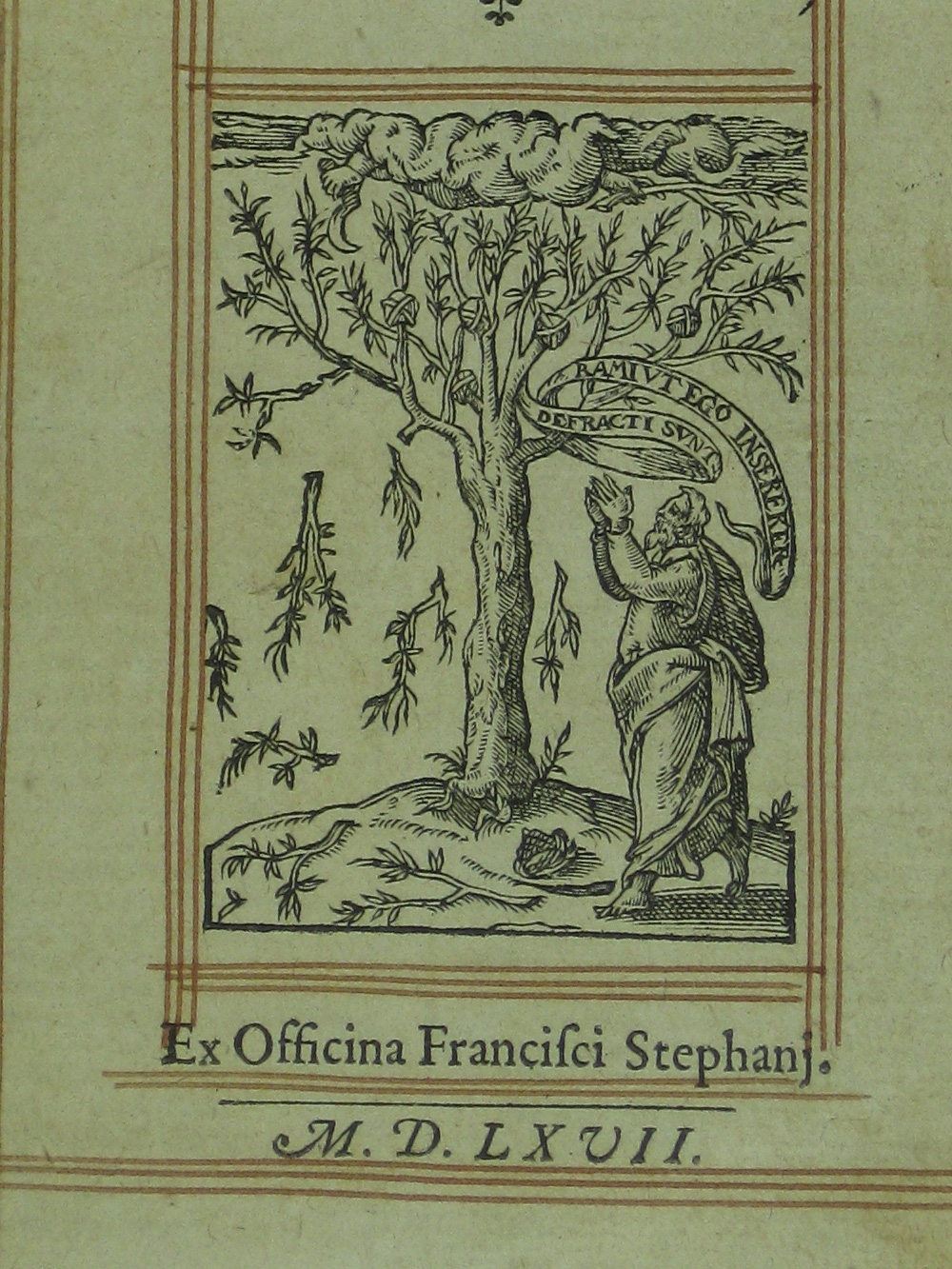 The initial title page in the volume, which is mounted on a stub, comes from a 16th-century Latin edition of the Vulgate New Testament: D. N. Iesv christi Nouum testamentum, siue foedus. [Geneva]: François II Estienne, 1567. What follows the title, however, is not this edition, but is instead a New Testament taken from a Clementine Vulgate edition that was issued with both Old and New Testaments. Although it has not been possible for me to examine copies, the leaves that constitute the New Testament in all likelihood come from an edition printed by Joannes Jullieron in Lyon during the 1610s; as in this copy, the New Testament text in the Jullieron editions of 1614 and 1618 ends on p.831. I have not been able to locate other editions with this pagination. These dates are also consonant with the date of the accompanying Sternhold-Hopkins psalter and the likely date of the binding.

Red ruling is consistent throughout both the New Testament and the following psalter—the added Estienne New Testament title page is also ruled in what is almost certainly the same red ink in the same pattern. Though the binding on its own confirms this, the ruling helps to indicate that the New Testament and the Sternhold-Hopkins copies were bound together at an early date. The ruling, which travels far into the page gutters, would have been added prior to binding, when the sheets were unfolded. That the ruling on the Estienne title page matches the rest of the ruling suggests, too, that the title page was tipped in when the two works were first joined together. Although I have been unable to confirm this, my suspicion is that the Jullieron Bible editions do not provide a divisional title page for the New Testament, making the Estienne leaf an aesthetically satisfying addition for the owner who commissioned the sammelband.

The volume is bound in a roughly contemporary English binding of polished calf, with quadruple blind-blind-gilt-blind ruling around the edges of the boards and double-gilt ruling dividing the flat spine into compartments. The binding is slightly rubbed with bumping to the corners and some splitting at the joints, but the boards remain firmly attached. This style of binding would have been very much standard for the period, making the volume, in appearance, a very typical English book.

What is much less typical, and what makes this book such an interesting and important one, is that it pairs a translation associated with the Pope and Catholic worship with the Sternhold-Hopkins psalter that had by the early seventeenth century become a mainstay in Protestant worship, both public and private. In doing so, this book prompts a reconsideration of traditional assumptions about the use and possibly the confessional status of both texts. If the owner were Protestant, then the standard line is that he (and it would be a man in this story) would have consulted the Vulgate only as part of philological or other scholarly inquiry, perhaps in part to reject it. Though the Vulgate in this volume could conceivably have been read in this way, its juxtaposition with the genuinely popular (both economically and demographically) Sternhold-Hopkins psalter should cause some pause, and may suggest devotional rather than scholarly use of the Latin text—or both. Sternhold-Hopkins editions were very frequently paired with vernacular New Testaments and Bibles in the period, and the general sense is that portable volumes combining them were designed to be taken to church and used in private or family worship at the home. Of course, a Latin New Testament would not have been particularly useful in the context of a vernacular Church of England service.

I have seen at least one other instance of a Latin Bible paired with a Sternhold-Hopkins edition, but the Latin text there was the Tremellius-Junius-Beza translation rather than the Vulgate. This Protestant version had become popular in England amongst learned sorts in the later sixteenth century and was in 1640 issued in a handy 12mo edition stripped of the erudite commentary of its translators; it was this mid-century edition that I saw paired with a Sternhold-Hopkins psalter. Both the Tremellius-Junius-Beza volume and the present one suggest that Latin Bibles and devotional reading could go hand-in-hand, but the choice of an edition of the Clementine Vulgate in this book remains curious.

Presumably it would have been quite possible for the owner or his English bookseller to have located a copy of Beza’s popular New Testament translation—in either a domestic or a continental edition—so it seems likely that the choice of the Vulgate was an intentional one. Or perhaps the buyer just didn’t care. There is good evidence that vernacular readers were in general quite unconcerned about the differences between translations, and it is possible that even Latin readers were not all attuned to or interested in textual variants and theological niceties. Another possibility is that the owner in fact had Catholic rather than Protestant inclinations, leading to the choice of the Vulgate, but nevertheless had an affinity for mainstream Protestant practice and tradition. That the owner may have been a so-called “church papist” with a real commitment to Protestant devotional life is a tantalizing thought, indeed.

The volume does provide one fact about its history in the form of a manuscript inscription on the Estienne title page: “Ex bibliotheca Camusiana oratorii Gratianop[oli].” This identifies the book as one owned by Cardinal Étienne Le Camus, Bishop of Grenoble, who donated his library to the Oratory on 16 June 1700.** By that date, then, the Cardinal clearly had the present volume in his possession. Although any number of circumstances may have brought the book into his hands, this bit of Catholic provenance may help to strengthen the case that its original owner had Catholic and/or continental ties.

All said, this is a fascinating and important volume that will surely contribute to a more nuanced history of reading and confessional life in England and beyond. As such, it belongs in a research institution where it will be made available to scholars. SOLD

* Some information this listing derives from the catalog of a previous dealer.
** Thanks for this identification are due to Robert MacLean (@bob_maclean) at Glasgow University Library, whose Google skills apparently exceed my own.